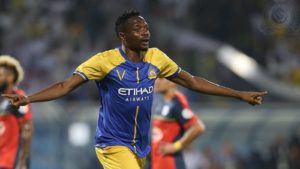 The Saudi Professional League side officially confirmed the 28-year-old’s departure from the club on Sunday night.

It has been reported that Musa has parted ways with the club mutually as he hopes to continue with his professional career in Europe.

“Thank you Nigerian falcon, wishing you all the best in the future Ahmed Musa!,”

The speedy winger was still contracted Al-Nassr who he joined from English Premier League club Leicester City two years ago.

Musa had two years left on his contract with Al Nassr, who are perennial Saudi Professional League title contenders.

During his time with the Najd Knights, Musa won the Saudi Professional League title in the 2018/19 season and the 2019 Saudi Super Cup.

Musa has scored 15 goals in 87 appearances for Nigeria.