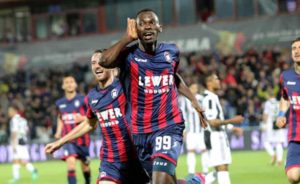 Real Club Deportivo Mallorca are close to making Super Eagles star Simy Nwankwo the second-ever Nigerian to ever play for the club.

Former Nigeria international Finidi George was the first Nigerian to play for the newly-promoted side in the 2003-2004 season before his retirement.

Simy could now be the second Nigerian after Finidi star to play for the club. Soccernet, as per, Diario de Mallorca reported that The Pirates made a bid of €3.5 million to Crotone for the services of the 29-year-old striker.

Although the offer was rejected by the Italian club, talks are still going on between the two clubs. According to Football Italia, Mallorca have improved their offer, and a deal could now be announced anytime soon.

Simy is a man in demand after a record-breaking season, which saw him became Nigeria’s top scorer in a single campaign of Europe’s top five leagues with 20 goals in the Serie A.