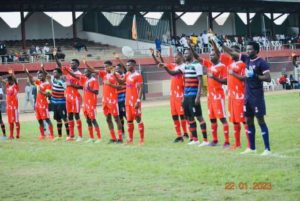 Following their 1-0 home loss to Lobi Stars on Sunday, Abia Warriors coach Erasmus Onu has expressed his dissatisfaction with his team's performance in the game, Nigeriasoccernet.com gathered.

Following a good start to the season where they racked up six points from their first two league games, Warriors fell by a lone goal at home in their match day three to Lobi Stars a result not pleasing to the gaffer of the team.

Reacting to his team's performance after the game, Onu said:

"When we won away we thought we'd arrived but we knew now that we have not arrived.

Onu also believed with the current structure of the league, teams can get results at any ground, while also promising to fix his team to pick up food results again.

"If I can lose, somebody is losing even right now and I have beaten somebody, there is nothing wrong about it, it's just that I have to go back to the computer and start.

"When we returned to training I will ask questions about what went wrong," he concluded.