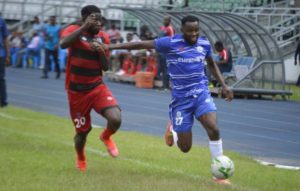 Left wing back of new Nigeria Professional Football League champions Rivers United, Ebere Duru in an exclusive interview with Nigeriasoccernet.com in the early hours of Thursday expressed his joy to be among this history creating Rivers United team.

Ebere Duru who played a key role in Rivers United emergence as the 2021/22 NPFL champions stated that the team in the camp is high as everyone is happy and proud to be part of this historic moment.

"Everybody is happy, its a thing of joy to be among the set of players to make history with Rivers United."

Duru who joined United from Lobi Stars attributed the achievement to dedication, commitment and hard work on the part of the players, coaching crew and the government.

"Its a happy moment for us I must confess.

"To be part of this historical moment to have helped the Rivers United win their first ever NPFL title and also doing that with a record highest points because currently we have 74 points with two games left which is higher than the 71 points accumulated by Akwa United last season when they won the league, is all joy.

"Right now, the camp is lively and everyone is happy." 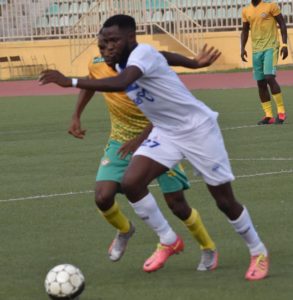 He also stated that it was a clear project from the start of the season for them to win the league and that was achieved with the management investment into the club, improvement in the technical aspects as well as the inspiration and motivation from the club's general manager.

"Our aim was to win the league from the start of the season.

"We have a very strong coaching crew and also the general manager of the club Barrister Green before the start of the season said to us Before a team in the NPFL can defeat us this season will be very hard, that was after our performances at the continental tournament where we eventually crashed out.

"The coach Stanley Eguma also said to us we don't want 2nd position this time around because we are always finishing 2nd. We want to win the league this season and that we've achieved.

"The governor as well gave us his full support and you know this season will be the final one before he stepped, so we decided to give him a parting gift."

Duru admitted his team were under pressure at some points but did not allow anything affect their focus.

"Plateau United were a threat. At a point during the season it was Remo Stars and then Plateau United came up but our focus was never on them but on playing our games. I remember a time when it was just a point between us but we never shivered. They made us push harder and we did same to them as well."

Duru from his left wing back position has so far contributed three goals and two assists to Rivers United run in the NPFL.

Also talking about Rivers United home triumph in the state FA Cup on Wednesday, he said:

"As a player you should be proud of yourself to win a trophy and we're happy with the outcome of yesterday's FA Cup win.

"Another trophy in the bag for me and to my name."

"Very very possible for us to win the Aiteo Cup. The league is a big motivation for us," he said when asked about Rivers United target in the national Aiteo Cup later in the season.

"Its very possible for us to win it if we can put same attitude we used in winning the league."

"Leaving lobi stars where I started the professional football to Rivers where I have won the league is a big one for me." 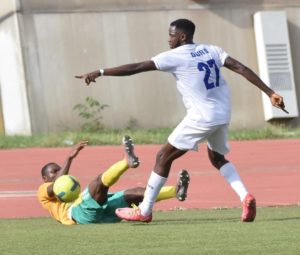 "Many of my friends are currently playing for the club and I'm happy the team is back in the NPFL.

"If I still remain in the NPFL next season, a return to Benin which is my home to play Bendel Insurance will be a great welcome home for me."

Ebere Duru about three years ago represented the country at the CHAN level and looking forward to the next edition which he's likely going to feature in, he said:

Ebere Duru and Rivers United will play their final two games of the season against relegation battling Shooting Stars in Ibadan and Gombe United in Port Harcourt where they will be handed the 2021/22 NPFL trophy.