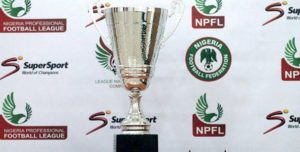 The Nigeria Football Federation on Friday has announced a sponsorship deal with a leading fintech company, Bitnob.

The NFF’s league management arm, the League Management Company made the announcement on Friday

In a statement released by the LMC, it said the deal with Bitnob Technologies Inc. is a mutually beneficial alliance.

Shehu Dikko, Chairman of the LMC said the Fitnob Technologies will be met on Tuesday to unveil the deal and announce the important details in the deal.

Dikko said the negotiation took some time as they had to ensure Bitnob benefitted from the domestic league and as well enhance the strategic growth of the league.

Bitnob will be sponsoring the league as an Elite Sponsor in the Financial Technology Category.

The NPFL has so far gone undisturbed this season with matches going as scheduled and the league enjoying a reasonable level of reviews.