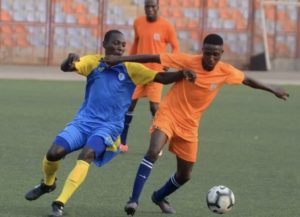 Akwa United face an uphill task as they clash with the in-form Rivers United as they seek to extend its lead at the top of the Nigeria Professional Football League (NPFL) table in match day 33, while Adamawa United host Sunshine Stars in a crucial relegation battle.

It is a battle of third place versus first as the Pride of Rivers (Rivers United) take on the Promise Keepers (Akwa United) in a decisive clash that may change the outcome of the NPFL.

A win for Akwa United could see them closer to actualising their dreams of being crowned the champions of the 2020/2021 NPFL season. However, a defeat would be a massive blow for the Akwa Ibom boys and would ultimately blow the title race wide open.

In another encounter on Sunday, Adamawa United will host Sunshine Stars of Akure in a crucial relegation battle.

Adamawa are rooted to the bottom of the NPFL table, while Sunshine stars are in 16th. Sunshine would be hoping that a victory against Adamwa would take them to 14th on the log.