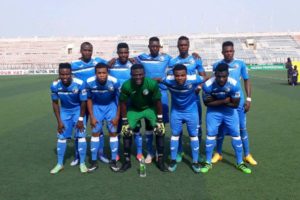 Enyimba continued their impressive run in the Nigeria Professional Football League following a slim 1-0 win against Niger Tornadoes in a rescheduled matchday 15 encounter at the UJ Esuene Stadium, Calabar on Wednesday.

Emeka Obioma scored the winning goal for Enyimba on the dot of 90 minutes.

The Peoples Elephant who have now lost only once in their last 13 NPFL games moved from 10th to tye eighth position in the table.

At the Godswill Akpabio International Stadium, Uyo, Akwa United also earned a 1-0 win against Go Round FC in a rescheduled match day 22 encounter.

Paul Obata netted the winner for the Promise Keepers a minute before the half hour mark.

The Promise Keepers jumped from ninth to sixth position in the table following the win.