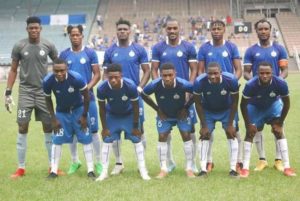 The Pride of Rivers got a 2-1 win over Tornadoes in the match day three encounter to go top of group A of the league standing.

Ebube Duru's goal in the 31st minute to give Rivers United maximum points.

Kazie Enyinnaya had put the home team in front with a header from a corner kick well executed by Chiamaka Madu in the 7th minute.

Charles Okafor had gotten a goal in the fifteenth minute from a resulting corner Kick delivery but the referee says offside.

However,Waheed  Adebayo levelled from the penalty spot after David Okoromi was pushed down inside the area and the referee points to the spot.

Duru restored the lead for Rivers from a free kick that was well struck in the 31st minute of the game.

Tornadoes pushed for an equaliser through Musa Wakili and Munir Idris, but to no avail as the first half ended 2-1 in favour of the home team.

The second half failed to produce any score despite chances from both side especially the away team as the first half score remained unchanged when the final whistle was blown.