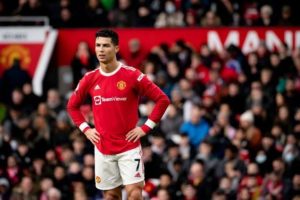 After parting ways with Manchester United on Monday, several clubs have shown interest in the player with his boyhood club Sporting Lisbon said to be ahead of others in the race to sign him.

Lobi Stars however has stated clearly that they never at any point thought of signing him neither did they reach out to his camp for a possible switch to the NPFL.

In a statement released by the club, it was learnt that they are yet to make any contact with representatives of following his release from.

"Pls be informed that #WeAreLobi is yet to make any contact with representatives of #CristianoRonaldo following his release from @ManUtd," Lobi Stars statement reads.

"We wish him the best & #LobiStars will make no further comment on this,” the club added.

Ronaldo is currently faced with the duty of winning the FIFA World Cup with Portugal and will make a decision on his future after the tournament.