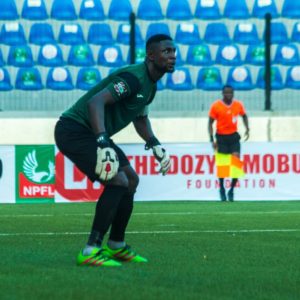 Super Eagles and Enyimba FC goalie, John Noble in an exclusive interview with Nigeriasoccernet.com revealed that the time to restore the club's glory is now.

John Noble who is the captain of the side had a rather torrid last season with the club as they failed to pick any of the continental ticket.

Noble who enjoyed Super Eagles invitations under Gernot Rohr believed his team has what it takes to claim the top prize in the land and also return to Africa's biggest club competition.

"Enyimba is a team that has always been in the continent and due to what happened last season, we said to ourselves that we're going to do everything humanly within our strength to bring back the team to where it originally belong," Noble said.

"The spirit in the team has been high and if you watch the just concluded pre-season in Lagos, you'll see everybody fighting because we really know what we want.

"We know the name at stake, the badge and we're doing everything possible to make sure we bring back Enyimba to the glory days.

"Definitely hoping for a trophy this season and also take Enyimba back to the continent."

Talking about how he has been helping the new players adapt to the club's tradition, Noble said:

"You know when a team sign a couple of new players, its always been difficult for them to come together and play a particular style the coach will want them to play but I'm the case of Enyimba what I did was to call for a meeting.

"I made them know here is. Enyimba, we're known for victory, we don't accept defeat. We just have to work together, everybody is one. I carried everyone along and to God be the glory we are where we are today and hopefully we'll get something out of the season. Everyone has been cooperating well," he added.

Noble express his disappointment with lack of league actions yet and hopes things will go as planned by the Interim Management Committee.