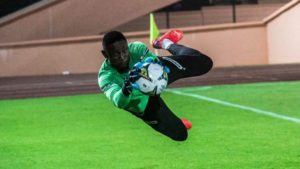 Enyimba goalkeeper John Noble has been announced as the team captain ahead of the 2022/23 Season.

In a statement released by the club, Noble will captain the people’s Elephant following the departure of Austin Oladapo, who left to join the Congolese club TP Mazembe.

John Noble joined Enyimba in 2020 from Togolese Club ASC Kara and has established himself as an important member of the squad, stringing together a series of impressive performances for the Two times African Champions, to become a mainstay.