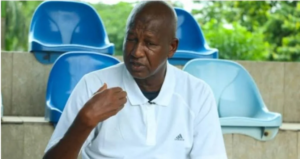 Head coach of Rangers international Abdu Maikaba has called on the management of the club to terminate his contract with immediate effect.

The Flying Antelopes were forced to a 1-1 draw by Sunshine Stars in their Nigeria Premier Football League matchday three encounter at the Awka City Stadium on Sunday.

The seven-time champions remain rooted to the bottom of the Group B table after securing just one point from their opening three games.

The club fans tried to attack Maikaba during half-time but for the quick intervention of security agents.

In an emotion laden speech, the experienced tactician stated it is time for him to leave the Coal City club.

“We have worked so hard, but unfortunately things are not going the expected way. And l would like, if it is going to be possible to meet the representatives of the government of Enugu State to terminate my contract,” Maikaba said.

“They see me as the problem of the team, I really love this team, they have treated me so well but if am the problem, l would like to go.”