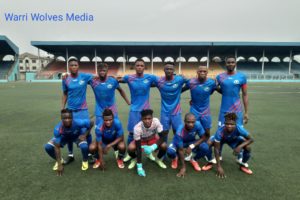 Warri Wolves defeated Crown FC in their round 25 match in the Nigeria National League (NNL) on Saturday.

The Seasiders beat their opponents Ogbomosho by two goals to one to better their chance of promotion to top tier football.

The win took them to the top with a point ahead of previous table toppers, Bayelsa United.

The "Prosperity Boys" played a goaless draw away against Nnewi United to take the points garnered to 42 points.

While Warri Wolves with their win now have 43 points.