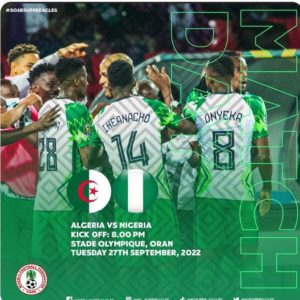 The official starting line up of the Super Eagles team against the Desert Foxes of Algeria on Tuesday.

In goal, goalkeeper, of Watford FC of England who was in goal some days ago against the Algeria B team is replaced with goalkeeper Francis Uzoho of. 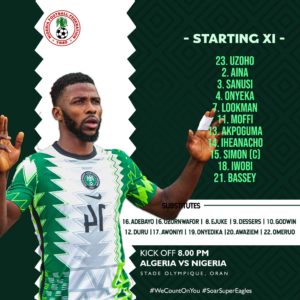 Ola Aina, Akpoguma, Zaidu Sanusi and Calvin Bassey at the heart of defense to serve as cover for the goalkeeper.

Alex Iwobi, Moses Simon and Frank Onyeka will coordinate the midfield while Kelechi Iheanacho, Terem Moffi and Ademola Lookman will be the forwards.

The match starts by 8pm at the Oran Stadium in Constantine.