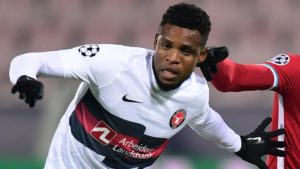 Nigeria midfielder Frank Onyeka's jersey number at the Premier League side Brentford has been revealed.

The newly-promoted side confirmed the arrival of the 23-year-old on July 20 from FC Midtjylland and signed a five-year deal.

Since then he has been part of the team, taking part in friendly matches against Manchester United and Valencia.

The Super Eagle is among the three players confirmed at the club, and the Bees have revealed the jersey number the West African will wear while revealing some changes to the team as well.

"Marcus Forss has taken the number 9 shirt while Josh Dasilva is now the owner of the number 10. Josh's previous number, 14, will be worn by Saman Ghoddos with the other change seeing Mads Bidstrup take the number 28 shirt.

The midfielder will be rubbing shoulders with the Blues man in the Premier League this season. He also stated he was a Yaya Toure fan and went on to explain why.

"I'll say Kante [is my favourite player] but before he moved to Leicester City I followed Yaya Toure but now it is more of Kante. Toure was amazing, good on the ball, the way he played his own football was amazing, a box-to-box midfielder.

"I think it is more of Kante now because I watch him a lot. The way he plays is pretty amazing. I have never seen a midfielder like him. But he is different, I am different. He is Kante, I am Frank so we are different. I play my own way, he plays his own way."