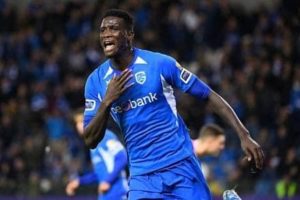 The Nigerian international has looked a shadow of his predatory best in recent weeks, but he was on hand to net the opener against Shakhtar Donetsk on Tuesday night

Paul Onuachu gave Genk a first-half lead in their UEFA Champions League third-round clash against Shakhtar Donetsk at the Luminus Arena, his first goal for the Blue-Whites this term.

The Super Eagles striker had failed to find the back of the net when the Smurfs lost their Super Cup clash 3-2 against league winners Club Brugge a couple of weeks ago. And he equally fired blanks as Genk laboured to a 1-1 draw on the opening weekend of the Jupiler Pro League.

With Onuachu looking like a failure to secure a dream move abroad was affecting his efficiency, he was dropped from the Racing squad that hosted Oostende last week. Still, the FA Cup winners fell to a disappointing 3-2 defeat at home to the visitors.

But Genk manager John van den Brom restored Onuachu to the starting lineup ahead of Shakhtar’s visit. And the Super Eagles star showed he still knows his way to goal by getting his head on the end of a Junya Ito cross five minutes before the break to hand the home side a deserving lead.

It, however, ended in disappointment for the Belgian side as second-half goals from Tete and Alan Patrick handed Shakhtar a fine 2-1 away win on the night.

Compatriot Cyriel Dessers replaced Onuachu in the 82nd minute, but the former Heracles man could not help salvage a draw for the Smurfs.