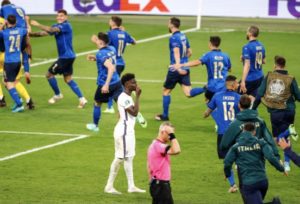 Super Eagles midfielder Joe Aribo has shown his support for Bukayo Saka after the Arsenal star missed the fifth penalty in England’s penalty loss to Italy in Euro 2020 final played at Wembley.

The Three Lions, playing in their second major final after winning the World Cup in 1966, lost on penalties to Italy after both sides played out a 1-1 draw following 120 minutes of action.

Following the match, Saka received several racist insults on his Instagram page. However, he has received support from the football community, with Aribo also playing his part.

The Rangers midfielder, who enjoys watching his fellow players, posted a picture of Saka on his Instagram stories.

Just like Saka, Aribo was also born in England to Nigerian parents. However, unlike Saka, the former Charlton midfielder chose to represent Nigeria, which raises the question of whether Nigerian origin players born in England are better off representing the Super Eagles.

Nigeria and England have always been engaged in battles over player allegiance. Players like Victor Moses, Alex Iwobi and Ola Aina all played for the England youth team before representing the three-time African champions at the international level.

Meanwhile, Tammy Abraham and Fikayo Tomori are some of the players to choose England ahead of Nigeria in recent times.

While it’s normal for these players to feel more attached to England, given they’ve spent all their years in the country, the recent fallout from Saka’s situation and the success rate of former players in their situation should make future English-born Nigerian stars think twice before representing the Three Lions.

Saka did not deserve the racist insults he received yesterday because he was not the reason why England lost. In fairness, England were lucky the game went to penalties as Italy were the better team on the balance of play.

Saka deserved praise for taking the responsibility to take that penalty. Yes, he missed, but it wasn’t the reason why England lost.

It’s a sad situation, but maybe it could make future English-born Nigerian players think twice before deciding to represent England.