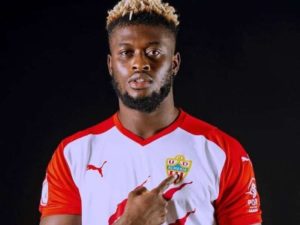 Nigeria forward Anthony Abidemi Lokosa has joined the Spanish Segunda club, UD Almeria, on loan for the rest of the season.

Almeria, who narrowly missed out on promotion to LaLiga last term have the option to make the move permanent at the end of the season.

“The UD Almería affiliate strengthens its attack with the addition of Anthony Lokosa, a 24-year-old Nigerian forward, who arrives on loan, with an option to buy, from Pharco FC of the Egyptian Football First Division,” reads a statement on the club’s website.

“This footballer has a great physique that allows him to dominate various facets of the offensive zone, but, above all, he is a very powerful player, whose corpulence makes him strong in the air game. It should be noted that it can act both in the demarcation of ‘9’ and in either of the two bands.”

Lokosa’s arrival increases the number of Nigerians at the club to two with Sadiq Umar already a key member of the team.