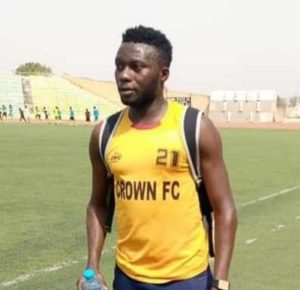 The Football fraternity in Nigeria on Monday, November 16 went into mourning following news of the tragic death of Yusuf Usman Usein, a Crown FC of Osogbo player who slumped and died in the middle of a training session on Sunday, November 15.

Usein, who was known popularly as 'Eiye' was training with Gateway FC of Abeokuta hoping to sign for them.

Medical professionals rushed to the pitch to try to resuscitate the player after he slumped. Crown FC of Ogbomoso media officer Tunji Alabi reported the player died later at midnight.

”It is so unfortunate that we have lost Usein and we pray that God will forgive him and grant him eternal rest. He was a good and dedicated player when he was playing for us in Ogbomoso,” said Alabi.

Gateway FC will be playing in Nigeria’s National League in the 2020-21 season.