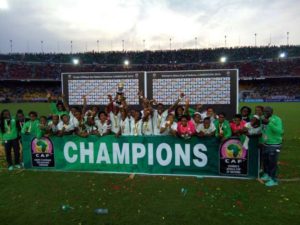 Super falcons of Nigeria have won the continental title 10 times

Only seven countries, headlined by the USA and Germany, have been to every FIFA Women's World Cup since its inception in 1991, and Nigeria is a member of that rarefied company.

But the Super Falcons are the only member of that elite group yet to qualify for the 2019 edition in France. And by the looks of it, this will be the least straightforward of their journeys to reach the showpiece tournament.

Three countries will qualify from Africa in the coming weeks, namely the three top finishers at the Africa Women Cup of Nations, which begins in Ghana this weekend.

Nigeria have dominated the tournament, and its two previous iterations, by winning 10 out of 12 editions. In that time, they have only finished outside the top three once, in 2012 when they were beaten by South Africa in the semifinal and then lost to Cameroon in the third-place match.

Extrapolating from there, it would be only natural to assume that Nigeria will be a straightforward pick to finish in the top three at worst, and champions at best.

It is not that straightforward, however. Equatorial Guinea's wins in 2008 and 2012, the only two titles not claimed by Nigeria, showed that a new force was emerging, and the sides will meet in the group stage this month.

Rather than work towards staying ahead of the chasing pack, the Falcons appear to be heading in the opposite direction in recent times, but through little fault of the players themselves.

Where other countries, especially South Africa, have been playing a glut of friendly matches, the Nigerians have only played one friendly in two years. For the whole of 2017, they were without a coach and did not play a single game.

Their only preparatory matches building up to the AWCON was against two boys teams, one in Nigeria and another in Cote d'Ivoire, and another against the Ivorian Women's league champions.

To rub salt in the wound, the competition is being played in Ghana, where, and against whom, the Super Falcons have historically sweated for results. Ghana were the first-ever team to beat Nigeria, when Alberta Sackey's goal in 2002 in Warri condemned the Super Falcons to a historic maiden loss.

And two years later, the Falcons were just one penalty shootout away from missing out on the 2004 Olympic Games after two 0-0 draws in Ibadan and Accra.

The Falcons have little margin for error in the group games, and even less as the event progresses. Any other time and any other tournament, that would seem par for the course. This time, Banyana Banyana have shown the way with their preparations and motivation, Cameroon have proven formidable opponents, and Ghana have home field advantage.

Nigeria remain favourites going into the tournament, however, and it would be foolish to think that the Super Falcons are not one of the top three countries on the continent, even in a group that contains the match-ready South Africans.

If the Super Falcons are to remain in that elite company with Brazil, Germany, Japan, Norway, Sweden and the USA, the team will have to look past their troubles, reach into the deepest reserves of their quality, and fight to the last.