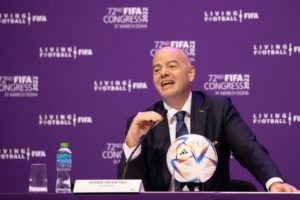 Following Nigeria's non participation at the World Cup, the Nigeria Football Federation will lose out on a $1.5 million allocation that comes to member nations that qualified for the mondial by FIFA

A sum of $9 million would also be lost just for not getting to the group stage and finishing below the 17th place.

Nigeria had lost the World Cup ticket to Ghana after playing stalemates in both legs of the qualifier, but lost on penalties in Abuja.

In a statement by FIFA, winners of the World Cup will receive as much as $42 million, the highest figure a winning federation will ever receive.

Teams that are placed 17th through 32nd will each get $9m, while teams that progress to the round of 16 will receive 13m.

Besides, 1.5 was allocated by FIFA to qualified team to help in the expenditure for the World Cup; a money Nigeria would have gotten if she had qualified.