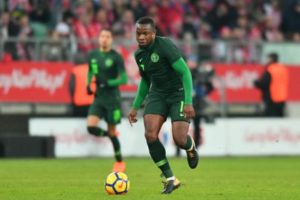 Nigeria international Ogenyi Onazi has revealed that he came close to joining Italian Serie A side FC Crotone.

Onazi found it difficult to break into the Trabzonspor’s starting line-up after returning from a long-term injury and he was released by the club.

The 27-year-old has signed a year contract with SonderjyskE which comes with an option to extend the deal with two further years,

Onazi, who once on the books of Serie A club Lazio, came close to returning to Italy, but Crotone withdrew their deal.

“It’s true I had a medical at Crotone. When I was in Turkey we had an agreement,” Onazi told BBC.

“My agent [Ayodele Makinwa] explained everything to me on the phone, but on getting to southern Italy they pulled out of the agreement.

“This happens in football but it’s the way of life.”

Onazi spent four years with Lazio and he played 110 matches for the team and netted seven goals in the process.

He has played 52 international matches for Nigeria and netted once.