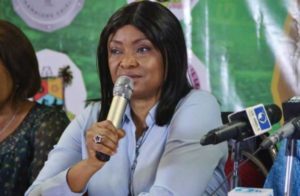 Aisha Falode, chairman of the Nigeria Women Football League (NWFL), says the nation is determined to win the maiden edition of the Confederation of African Football (CAF) Women’s Champions League.

Falode spoke on Tuesday at the opening of the women league’s new secretariat in Abuja.

She said it is the desire of the country’s women team to win the first edition of the championship.

Falode also said women football, which has taken the country to higher grounds in the continent and across the world, will be given the much-needed attention while players’ welfare will be improved to get the desired result.

CAF had recently announced the commencement of Women’s Champions League — slated for 2021 — with a six-zone qualification series.

Each of the zones will organise qualifiers to determine the finalists for the eight-team tournament.

One team will emerge from each zone while the host country will be represented by one team. There will also be provision for an additional team.

“We will not only win it [Champions League] but we will prepare for it,” Falode said.

“This time we are asking you (Amaju Pinnick) again, that we don’t want to compete in the CAF Champions League for women for fun.

“And we have fantastic teams in the NWPFL. We have teams who have produced a lot of players for the national teams. We will need to encourage these teams. We’ll need to play more competitive matches.

“We’ll need to play a season which is not abridged. We need to play a full season in other to prepare our teams for that competition that’s ahead of us.

“Though, the Champions League is not a given. If you see the CAF has also said there’s going to be a zonal play off and the winner that will qualify for the Champions League. Even if you win the NWFL for instance, that does not give you an automatic qualification for the CL.

“You still have to meet other winners of the other Leagues from other zone. And it is the winner from that zone that will represent them at the Champions League proper. So, it’s going to be a difficult one and that is why we have to prepare well.”