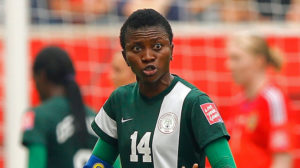 Super Falcons Evelyn Nwabuoku impressed for Pozoabense as they beat Cordoba 2-1 in the Cordovan derby in Saturday's Reto Iberdrola encounter.

The Nigeria international joined Pozoablense from Nigerian side Rivers Angels a week ago along with goalkeeper Tochukwu Oluehi and only the defender earned her maiden outing as a substitute.

Ariel Montenegro's side struggled to outplay their visitors in the local derby as the effort of new signing Cintia Hormigo almost handed the Blanquiverdes the lead in the ninth minute.

However, Encarni also came close for Montenegro's team but her effort from the left in the 18th minute went inches wide.

In the 30th minute, Maria Marin drove the ball into the hosts' box before setting up Karla Riley to open the scoring for Pozoablense.

The visitors' celebrations of the lead did not last for too long as the hosts responded almost immediately when Hormigo's fine pass found Nati Francisco to bag the leveller two minutes later.

On the brink of half time, Marin benefited from a defensive blunder off a corner kick to hand Manuel Fernandez's team the crucial away lead.

After the break, Pozoablense held their nerve despite the hosts' pouring attack before coach Fernandez brought on Nwabouku late and the Nigerian ensured a second-half clean sheet.

Nwabouku was in action for the final six minutes of the match against Cordoba after she replaced Karla Riley in the 84th minute, while compatriot Oluehi was an unused substitute.

The victory puts Pozoalbense on top of the Iberdrola Group A log with three points after the first match and they will aim to maintain their winning start, at home, against Granada on October 31.