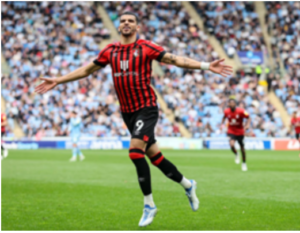 One-cap England international of Nigerian descent Dominic Solanke has emerged as a transfer target for Newcastle United as the Magpies look to strengthen their attack for the 2022-2023 campaign.

French outlet Jeunes Footeux claims that Newcastle United have made the signing of the Bournemouth attacker a priority.

The 2017 U20 World Cup winner is the second striker of Nigerian descent linked with a possible move to Newcastle United in the summer, after Napoli star Victor Osimhen.

Solanke made a splash in the recently concluded Championship season, with his goals firing the Cherries to the Premier League.

The 24-year-old, who was teammates with Super Eagles winger Ademola Lookman at the 2017 Fifa U20 World Cup, started every single game played by Bournemouth in the second-tier and tallied 29 goals.

Newcastle United are in the market for a striker with Chris Wood failing to make an impression following his move from Burnley, in terms of goals scored.

The report claims that former Chelsea and Liverpool striker Solanke will not leave Bournemouth for less than 45 million euros.