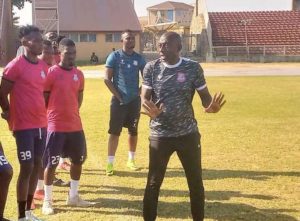 Niger Tornadoes have arrived in Kaduna for a week-long close camping to enable them prepare adequately ahead of the commencement of the 2022/23 Nigeria Professional Football League season.

Hours after they settled in their hotel rooms, the Ikon Allah Boys had a feel of the Ahmadu Bello Stadium, where they held a light work out.

Honourable Adamu Aliyu Mohammed, the Tornadoes chairman has always emphasized the need for the team to have a robust preparation to guarantee success during the season, hence his support for the team to proceed to close camping.

While there are still uncertainties surrounding the league's kick-off, even though it has been reported in the media space that the league commencement will not exceed this year, clubs have continued to prepare for any eventuality.

Meanwhile, the Technical Adviser of the team, Abubakar Bala Mohammed, while addressing the players, before leaving for Kaduna stated that having finalized the recruitment process for the new season, the close camping is apt and timely, as it will give him and his assistants an ample time and opportunity to work on the team's general tactics, group tactics and set pieces, as well as some includes discovered during the club's pre-season programs.

Other programs lined up in camp include lectures on the new laws of the game and a couple of friendly matches to fine-tune the team.