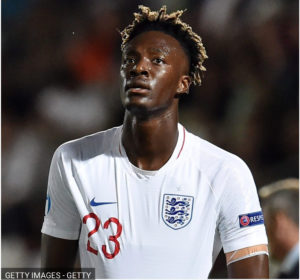 NIGERIA are desperately trying to get Tammy Abraham to snub England and play for them instead.

Reports in the African country say football chiefs there want the Chelsea striker to fill the international void left by Odion Ighalo.

Former Watford striker Oghalo, 30, retired in the summer after winning the Golden Boot at the Africa Cup of Nations.

He said: “We will not relent in our quest for good players to play for the country.

“But these kids are very independent-minded

“We have been told to wait until April 2020, when he hopes to make a final decision on the matter.

“I told him he stood a better chance of playing regularly for Nigeria than with England.”

He said: “I had a very honest and productive discussion with Tammy and his father last week.

“It’s been a long process but I can tell you authoritatively that he has agreed to play for Nigeria and not England.

“He and his parents have started the necessary documents to effect the switch.

“Clearly he understands he stands a better chance playing for the Super Eagles. With his talent he has the ability to fight for a place in the Nigeria squad, by God’s grace we make it to Russia, then he would contest for a chance to represent his fatherland.”

However, Abraham then issued a statement denying the claim and pledging his future to England.

Abraham is an England youth international – he won the Toulon Tournament with the U21s last year – and has played in non-competitive fixtures for the senior team.

But he remains eligible for Nigeria through his dad, who was born in Nigeria.