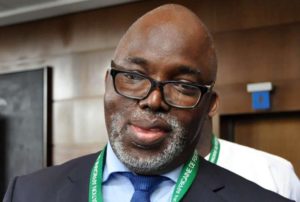 During a live session on NFF’s official Instagram page on Thursday, Pinnick said the NFF is at the moment expecting a total sum of $1million from world football-governing body, FIFA, and another $500,000 from the African confederation, CAF. “We would take from these various monies and add also from monies that we are expecting from our corporate partners, and see what we can give to each of the Clubs in these four cadres.

“This financial support is for them to get their campaigns off the ground for the new season that we have set for September/October, depending on what signals we get from the Federal Government, through the Presidential Task Force on the COVID-19 and other relevant organs. We are also going to support the league organizing bodies financially.” Although he added that the football body has written to the Government to also support the cause, he admitted that the Government is presently burdened by so many challenges wrought by the COVID-19 and it could be a tall order.

On the issue of the Points-Per-Game (PPG) formula adopted to bring the beleaguered 2019/2020 Season to a close, the NFF supremo reiterated that it was the decision of the vast majority of the Clubs in the NPFL, which was also subjected to careful analyses and consultations.

“We did not just sit down and take a decision; we consulted widely even after the Clubs opted for PPG following the work of the NFF Football Committee. The Ministry of Youth and Sports Development was also brought into the picture.”

Pinnick assured that the NFF would prioritize, for now, the qualification of the U17 and U20 women national teams for their various FIFA World Cup competitions, as well as getting top-grade friendly matches for the Super Eagles and the Super Falcons.

“CAF has written to inform us that the qualifiers for the U17 and U20 FIFA Women World Cups will hold in September and October. We are determined to prepare our girls well to qualify for both championships. At the same time, we are working assiduously to see that the Super Eagles and Super Falcons get quality opponents for friendly matches within the next few months. For the Super Eagles, we have an African team and a South American team on the cards.

“First and foremost, we have to get the Super Falcons a Head Coach of the highest quality possible. We are working on that, as our consultants are already on it, and also working on the appointment of coaches for some other National Teams. On our part, we have ringfenced a sum of money to pay the Head Coach of the Super Falcons for a number of years to come, so that challenge is taken care of.”

On the issue of continuous trailing of players of dual nationality with a view to getting them to represent Nigeria, Pinnick stated clearly that only players with the keen interest and resolve would be encouraged, as Nigeria would not beg any player to represent her. “It is about ardour and fervour. If a player has decided for Nigeria and only want to be assured that he would be much welcome, we will come in and provide that assurance.”

Pinnick said this year’s NFF/Zenith Bank Future Eagles Championship, which was already at the zonal stage before the disruption occasioned by COVID-19, would have to start all over again. “We have no choice. It is a programme so close to our hearts, knowing that it serves the important purpose of providing true youngsters for the National Teams. The pandemic has disrupted and certainly, some of the players would no longer be of the age that they were before the disruption. So, we have to start all over again.”

On a final note, the NFF President appealed to the media and other stakeholders of the game to shun the allure of negative sensation, with some misguided and mischievous members of the football family always bandying around fictitious and outlandish figures as having been misappropriated by the football body.

“I keep saying that you may not like Amaju Pinnick, but the bigger picture is Nigerian Football and its future. Negative stories about the game have a damaging impact on the brand and even when Pinnick leaves, the problem of the damaged brand will still be there.

“Those of us at the helm of the NFF presently are there because we have the passion to develop the game, do things differently, and take the Nigeria game to new heights. We came into office and brought gilt-edged corporations like PriceWaterhouseCoopers and Financial Derivatives Company on board because we are totally committed to transparency and accountability. There are legitimate claims that we forgo simply because we did not come into the Federation for the money. I appeal to everyone to consider the interests of Nigeria football and continue to shun the purveyors of half-truths and outright fiction.”