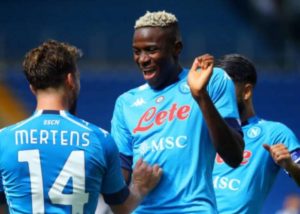 Napoli president, Aurelio De Laurentiis was forced to pay more than expected for the services of Victor Osimhen when Arsenal and Manchester United joined the race for the Nigerian forward.

Osimhen was the most expensive signing in Napoli’s history following the decision of the Partenopei to pay Lille as much as 80 million euros for the striker in the summer transfer window.

Ciro Venerato, RAI journalist, revealed this about the Super Eagles attacker during the interview he had on a radio program, Goal Show: “Napoli was forced to pay the Nigerian striker more.

“The Azzurri had closed the purchase of the attacker in March but Manchester United and Arsenal entered the negotiations.

“The Azzurri club had to review the price of the card and the salary to be paid to the player.”

Venerato then added: “Aurelio De Laurentiis, I say this as a transfer market expert in the face of such scenarios almost always blows up negotiations.

“He can’t stand those who suddenly change the cards on the table. But in the case of Victor Osimhen, he didn’t want to hear reasons and he closed the deal by also agreeing to pay the player more.

“The entrepreneur is certainly not stupid or naïve, he knows he would have bought a great player in perspective.” Osimhen has started justifying his huge fee after scoring six goals in his last ten Serie A appearances.”