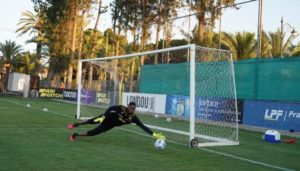 Super Eagles goalkeeper Francis Uzoho has sent word of encouragement to his former club, RC Deportivo La Corona, ahead of the coming season.

Deportivo are currently competing in the Spanish Segunda Division Group-1, the third tier of the football league pyramid in Spain.

The club is currently undergoing some difficulties, but they are still aiming to gain promotion back to the elite division.

Uzoho who made his debut in the Spanish top flight with the Branquiazuis has now extended word of encouragement to the management of the club ahead of the forthcoming season.

“My injury has taught me a lot of lessons and one out of the many is that bad times will definitely pass and light will shine again. @RCDeportivo you’ll be back to the top where you belong 🙏🏽 No matter the distance I’ll always love you # FORZADEPOR” he posted on his social media page.

Francis Uzoho left the club back in March after completing his move to Cypriot giants Apoel Nicosia.

Uzoho spent three years with Deportivo and he made his first-team La Liga debut on 15 October 2017, against 0–0 SD Eibar.