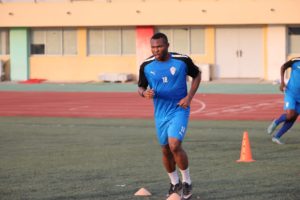 Samuel, while on a podcast interview hosted by Oluwayemi Omolagba, Uche Dozie and Damilola Oyebode said its been is long time ambition to play for Manchester United and Inter Milan.

Asked by Uche Dozie on what is dream European future is, Samuel responded:

"There are only two clubs I want to play for now in Europe. Manchester United or Inter Milan."

"I am not an Inter Milan fan. I am a Manchester United fan but I love Inter Milan.

"I love Inter Milan because of Obafemi Martins. The way he was welcomed and how they made the country a home for him.

"Inter Milan is a home and they welcome people as a family," Samuel concluded.

The former Bayelsa United striker also did not hide his love and desire for the Nigerian side, starting that on his return to NPFL, he'll turn down millions of naira offer from other NPFL clubs just to play for Bayelsa United.

“Bayelsa United is like home to me, they made me feel welcomed when I first arrived. I had that sense of belonging in the team and that’s why they have a special place in my heart even if I had a brief stint with them, they were memorable times.”

“If a team were to offer me millions and then Bayelsa United needs my services even for a far lesser deal, without hesitation, I will sign for Bayelsa United. The fans loved me, the team took great care of me as one of their own and I will never forget that,” Samuel stated.