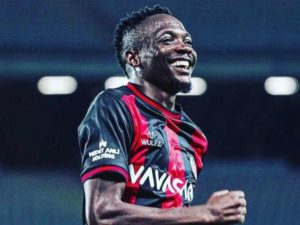 Super Eagles  captain Ahmed Musa started from the bench as his side Fatih Karagumruk claimed a vital 3-0 win over Adana Demirspor in a Super Lig match played on Saturday.

The forward had featured for the Super Eagles in the 2022 World Cup qualifiers where the West Africans claimed 2-0 and 2-1 wins over Liberia and Cape Verde respectively. It is for this reason, his side opted to rest him at Ataturk Olimpiyat Stadium.

However, the Democratic Republic of Congo forward Britt Assombalonga was handed a start by the visitors.

After a good start by the hosts, Lucas Biglia played a well-timed pass to Aleksandar Pesic in the 14th minute. The latter held his cool before finding the back of the net to give his team a deserved lead.

Pesic was blazing hot for the hosts and after coming close twice, he was not to be denied a third time. In the 21st minute, the Serbia international converted a Tunay Torun pass to complete his brace and double the advantage.

It happened to be the only goals scored in the first half, although it could have been more.

Fatih’s Grandchildren maintained their momentum after the pause. They looked hungry and determined to put more light between them and their opponents.

They were eventually rewarded in the 58th minute courtesy of Andrea Bertolacci after Vegar Hedenstad had done all the donkey-work. It was also a reminder to the Demirspor defenders who looked lost and marked poorly.

The goal was the motivation for the hosts who maintained their attacking spree. They used every opportunity to push forward in search of more goals.

With 10 minutes to go, 23-year-old French attacker, Yann Karamoh ensured his name was on the score sheet after scoring the fourth to ensure his charges reaped a healthy win.

The victory was the second one for Karagumruk, from the four matches they have played this season. The remaining two ended in a draw and a loss. They have further scored seven goals and conceded three in the process.

For Demirspor, this was a second loss this season. They have not won any match this season but have still managed to get two points from two draws.