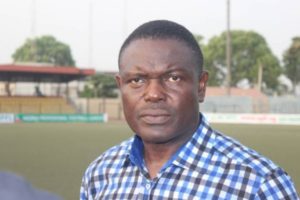 NPFL Side Rivers United coach Stanley Eguma says his strikers’ wastefulness in front of goal affected his side psychologically in the Confederations Cup loss to Futuro Kings.

Eguma speaking after the team arrived in Nigeria that, the inability of his strikers to convert their chances even affected them psychologically in the fixture.

“The players tried their best on (Saturday), but the wastefulness in front of goals was so much that it psychologically affected the team because, within the space of 20 minutes, we should have scored like two goals,” he lamented. “In fact, before the end of the first half, we should have been three, four goals up.

Obviously not pleased with the outcome of the encounter, Eguma, whose side won the Gov. Wike preseason Tournament and also reached the semi-finals of the Dapo Abiodun competition, says the result does not reflect their preparation.

Rivers United, who reached the group stages of the competition in 2017, is expected to advance to the first round despite the 2-1 loss to Futuro Kings.