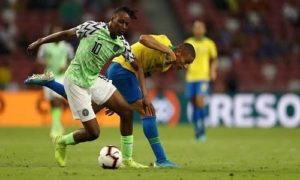 The Super Eagles midfielder delivered another solid performance as Rangers crushed Hearts 5-0 at the Ibrox Stadium on Sunday with the former Charlton Athletic star convinced that playing in his preferred position was key to his fine display.

Joe Aribo supplied the assist for Rangers’ second goal as the Gers recorded another huge victory that got them back on leveled terms at the top of the Scottish top flight with champions Celtic with just a single goal separating the Glasgow rivals.

The Rangers man functions as a box-to-box midfielder for Gernot Rohr’s side and his stay there may continue for a while with retired Super Eagles skipper Mikel Obi tipping Everton playmaker Alex Iwobi as the natural heir to the Number 10 role for the three-time African champions.

The 23-year-old, who is sometimes deployed as a central midfielder, has however revealed that playing further upfield helps him influence a game more productively.

“We’re happy with the performance (vs Hearts) as we knew what we had to do at the start of the game and we managed to deliver that,” Aribo told TheScottishSun.

“And, for me, it was good to play that bit further forward and get to interlink with Scott Arfield.

“We moved from one line to another and it’s really good to be able to do that.

“I just want to put in a good performance regardless of the position I’m playing. I just try to be the best that I can be for the team.

“I do what I have to for the team but I prefer to be as high up the pitch as I can.”

Aribo joined Rangers on a free from Charlton Athletic over the summer and has already racked in four caps and two goals for the Super Eagles since making his international debut against Ukraine in September.