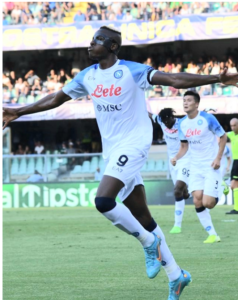 Manchester United will look to bring in Victor Osimhen in January after terminating Cristiano Ronaldo’s contract.

The Red Devils and the Portugal captain parted ways this week.

United announced that the forward has departed after a mutual agreement between both parties.

The Premier League giants will now turn to Osimhen as replacement for Ronaldo.

According to the Daily Mail, senior figures at Old Trafford met on Tuesday and Osimhen is believed to be top of their priority.

The 23-year-old has been in fine form for Napoli this season, netting nine times in 11 appearances.

The Nigeria international who moved to Napoli from Ligue 1 club, Lille has scored 38 goals and recorded 12 assists in 76 appearances across all competitions for the Partenopei.