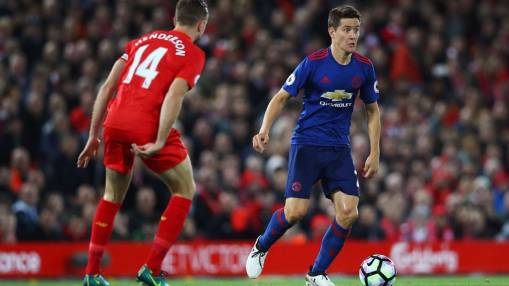 With Sadio Mane out for up to six weeks with a hamstring injury, Alejandro Moreno questions who will fill in for the striker. Don Hutchison looks at how Manchester United will be able to secure an away win against Jurgen Klopp's Liverpool. Don Hutchison discusses the three main things Liverpool will need to do in order to beat Jose Mourinho's Manchester United at Anfield.

Before Liverpool face Manchester United at Anfield on Saturday, in the 199th competitive meeting between English football's two most successful clubs, it is worth a brief history lesson about the changing face of a title-winning team.

Back in the 1980-81 season, Aston Villa ended the campaign as champions after using just 14 players during a 42-game top flight season, and seven of those played in every game.

When Liverpool last won the title in 1990, manager Kenny Dalglish used 21 players during a 38-game league season -- although that included one game for himself and just two-apiece for Mike Marsh and John Aldridge, who was sold to Real Sociedad a month into the campaign.

United's last title, in 2012-13, saw Sir Alex Ferguson select 25 players for first-team duty in the Premier League; while 24 players turned out for Chelsea on their way to the trophy last season, despite Antonio Conte not having to worry about European football draining the resources of his squad.

Villa's ability to win the league in 1981 using just 14 players is a feat that is unlikely ever to be matched again due to the sizes of Premier League squads and the demands placed on players in the modern game. But the increasing reliance on additional manpower emphasises the importance of strength in depth for any team with aspirations of emerging as champions.

And with United travelling to Liverpool on Saturday, the two clubs will collide at Anfield with injuries to key players raising questions over their respective ability to cope with the strain.

The true test of a title-winning team is no longer the best starting XI that a manager can put onto the pitch, it is the quality and reliability of those players asked to fill the gaps which ultimately decides who ends up on top.

If Jurgen Klopp was able to name a full-strength team this weekend, it would be difficult to argue against Liverpool being favourites, even if Jose Mourinho also had the luxury of putting out his best team.

Liverpool's 4-0 victory against Arsenal in August came with Klopp fielding his strongest team of the season -- though Philippe Coutinho was not being considered at that point because of his back problem and uncertainty over his future at the club -- and the home side produced a performance which had many tipping them for the title.

But since then, injuries and suspensions to key players have seen the wheels fall off for Liverpool, with the team recording just one win in seven games in all competitions since.

After getting a red card against Manchester City, Sadio Mane missed three games through suspension -- with Liverpool winning just one of those -- and the Senegal forward now faces six weeks out with a hamstring injury sustained on international duty.

It is a simple truth that Klopp's squad lacks the depth required to challenge for the title. The same was true last season and not enough was done during the summer to resolve that recurring fault.

But it is a different story at United, who now appear a much more formidable outfit than the one that turned up at Anfield almost a year ago last October and produced an ultra-defensive performance to escape with a 0-0 draw.

A quality player like Ander Herrera can be called upon to come in at United.

Despite heading to Anfield with four senior players unavailable -- Paul Pogba, Marouane Fellaini, Zlatan Ibrahimovic and Marcos Rojo -- and doubts over Phil Jones and Michael Carrick, United's summer recruitment, and the improvement of several players under Mourinho, has esnured their squad is now able to cope with the loss of key men.

Where Liverpool have no obvious replacement for Mane or Lallana, United can draft in Ander Herrera for Pogba, move Daley Blind into midfield in a defensive role in place of Fellaini or alter their formation to incorporate the likes of Jesse Lingard, Juan Mata or Henrikh Mkhitaryan.

At the back, Chris Smalling or Victor Lindelof can make up for the absence of Rojo and possible loss of Jones, while Marcus Rashford's ability to play as a central striker would at least soften the blow, if not completely make up for, any injury or suspension ruling out Romelu Lukaku.

Mourinho argued this week that his squad is now able to win without key players -- "We trust every player" -- and that is the key to challenging for the title.

Pep Guardiola can also claim the same confidence and belief in his squad at Manchester City, but Conte is discovering that his Chelsea squad is now worryingly shallow following injuries to Alvaro Morata and N'Golo Kante.

Klopp cannot boast the same number of options and alternatives as Mourinho or Guardiola and that is why, most likely, he will be unable to end Liverpool's lengthy title drought this season.

Liverpool simply do not have depth required. United do and, with both squads afflicted by injuries ahead of this weekend's clash, Mourinho's men appear most capable of riding out the storm to come out on top, not just on Saturday, but over the course of the whole season.

Mark Ogden is a senior football writer for ESPN FC. Follow him @MarkOgden_