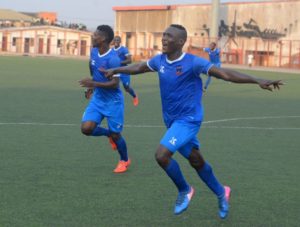 With three goals in four matches so far this season, Lobi Stars striker, Ossy Martins believes he could end the season as the league’s top scorer for the 2020-21 Nigeria Professional Football League (NPFL).

Martins benefited from good positioning to put Lobi Stars ahead on the 77th minute in Wednesday’s 2-2 draw away at Sunshine Stars. The goal was Martins’ third of the current season and puts him halfway through his best ever goal return of six goals in 2018-19 NPFL campaign.

And having bagged a goal in three consecutive games this season, few would doubt Martins achieving his target.

“I have doubled my efforts and put in more work. My target is to be the highest goal scorer this season and I believe I am going to make it,” he told npfl.ng.

The three goals put Martins joint-top of the goal scorers list after four rounds of matches this season and the former Rivers United striker is quick to praise the influence of teammates and head coach, Kabiru Dogo at Lobi Stars for his newly found form.

“My motivation is my teammate. They keep telling me that I should keep pushing and I can be the highest goal scorer this season and I took that to heart,” he said.

“I have always wanted to play for the coach ever since I was playing for ABS FC. So when I joined Lobi Stars, I made up my mind to play my heart out for him,” he concluded.