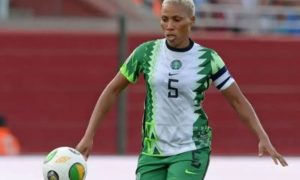 According to reports reaching us at Nigeriasoccernet.com, Spanish Feminine side, Levante Las Palmas have terminated the contract of Super Eagles defender, Onome Ebi.

Onome Ebi who joined the club as a free agent in the summer has been struggling to hit form since her arrival and this as reported by NigeriaFootball.ng led to the termination of her contract.

The Super Falcons captain signed for the topflight newcomers in September 2022 on a one-year deal at the age of 39 as she joined compatriot Rita Chikwelu at the club but unfortunately things did not go according plans.

During her short spell, Ebi endured a forgettable campaign as she only featured once for Levante Las Planas, with her only outing being a six-minute stint as a substitute against Asisat Oshoala’s Barcelona on November 3, 2022.

Before joining the Spanish club in September 2022, the centre-back had been clubless for almost 12 months since ending her third stint with Belarusian giants Minsk, after 19 appearances in November 2021.

Levante Las Planas was the 10th club for the veteran defender, who turns 40 in May following her stints in Sweden (Pitea IF and Djurgardens IF), Turkey (Atasehir Belediyespor FC, Duvenciler Lisesispor and Atasehir Belediyespor) and Belarus where her first stint with Minsk was between 2014 and 2016.

Despite the setback, the four-time Women’s Africa Cup of Nations winner will be resolve to make Nigeria’s party for the 2023 Women’s World Cup for an African record-extending sixth appearance in Austrailia/New Zealand in July.