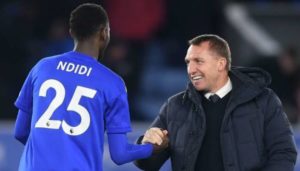 Ndidi, a defensive midfielder by trade, has featured as a central defender for Leicester in their two Premier League games.

And Leicester have gone on to win the games against West Bromwich Albion and Burnley.

And speaking on Ndidi’s change of roles, Rodgers explained that the Super Eagles star will return to his midfielder position when his defenders overcome their injury and suspension issues.

“Wilf is a player that I have real confidence in,” Rodgers said on Goal.

“He played the position [centre-back] very well and he has the attributes to play there. We don’t want him there for a long period of time.”

Leicester are scheduled to face Arsenal in a Carabao Cup match on Wednesday.

Ndidi made 39 appearances across all competitions for Leicester last season.