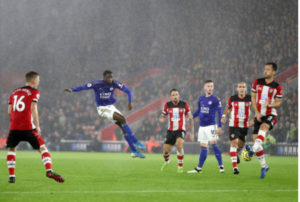 Leicester City are looking to win their sixth Premier League game when they face Everton at the King Power Stadium on Sunday, which they have not managed to achieve in the past.

Two Nigeria internationals are expected to be handed playing time by their respective coaches; Wilfred Ndidi for the home team and Alex Iwobi for the visitors, while a third Kelechi Iheanacho is out of favour at the Foxes.

Iwobi joined Everton on transfer deadline day for a fee in the region of £35m, making him the most expensive Nigerian player in history.

Previewing the upcoming game on their official website,Leicester City highlighted that the Super Eagles playmaker was one of talented players that joined the Toffees in the summer transfer window.

''Everton have a plethora of international players in their ranks, including England goalkeeper Jordan Pickford, Brazil star Richarlison, who worked with Marco Silva at Watford, and Iceland playmaker Gylfi Sigurðsson,'' Leicester City wrote.

''In the summer, they signed a number of talented players, including Moise Kean from Juventus, Jean-Philippe Gbamin from FSV Mainz and Alex Iwobi from fellow Premier League outfit Arsenal.''

Since making his Premier League debut in October 2015, Iwobi has faced Leicester City three times, winning once and losing the remaining two games.