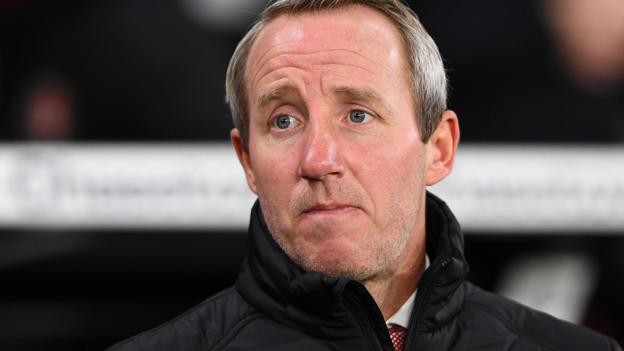 Lee Bowyer took charge of Charlton in March 2018 as caretaker manager, and was appointed permanently in September of that year

Charlton Athletic boss Lee Bowyer says he is close to signing a new deal with the Championship side.

The 43-year-old was offered a five-year contract earlier this month after East Street Investments took over the club.

"There are a couple of tiny things that need to be adjusted and then I think we are there," he told BBC Radio Kent.

"It is very good news for me and my team because we have worked hard. It is positive regarding the contract and I am happy with what I am hearing."

He added: "I want to be part of this club moving forward. That has been obvious from day one."

Bowyer took charge of the Addicks in March 2018 - initially as caretaker - and guided the south-east London side to promotion from League One last season.

He signed a new one-year deal last summer - just one day after the club, who were then owned by Roland Duchatelet, had said they were unable to agree terms.

The former Charlton, Leeds and Newcastle midfielder is unlikely to sign his new contract before Saturday's game at Preston North End.

"The most important thing for me now is concentrating on and preparing for the game," Bowyer said.

"There are a couple of things that need tidying up so it shouldn't take long. But the game is the priority for me."

Charlton have only won one of their past 15 league games amid an injury crisis at The Valley and have slipped to 19th in the table, five points above the relegation zone.

They will be without midfielder Conor Gallagher for the rest of the campaign, after he was recalled from his season-long deal by parent club Chelsea this week.

Bowyer said it was a "big blow" to lose the England Under-21 international, who subsequently joined fellow Championship club Swansea until the end of the season.

"Conor has been one of our best players this season," he added.

"He would have got better and better and I don't think anyone expected him to do what he did. It just shows what a good job we do here - we work hard and improve player.

"It hurt me because I wanted to keep working with him. But he is Chelsea's player and that was their decision. I can't control that, and we have to move on."

Bowyer says the club are "working hard" to bring new players to the club before the transfer window closes at the end of the month.

"We recognise the squad needs strengthening because of injuries and loan players going back," he said.

"It is tough in January, as people move the goalposts.

"We want to bring people in as soon as possible, but they have to be the right type of player. Any player has to strengthen us."