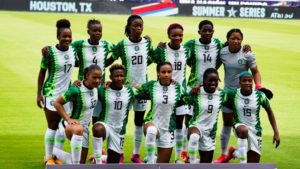 The latest FIFA rankings have the Super Falcons placed 39th with some interesting countries ranked higher.

FIFA has released its women’s national team rankings and the Super Falcons of Nigeria retained their spot as the 39th-best team in the world.

The June rankings cover the activities of the last three months and Nigeria was deemed to not have made any progress since the last one in March 2022 where they were also 39th in the world.

And while it feels like the Super Falcons should be ranked higher in the women’s game, the names of some of the teams ahead of Nigeria are surprising, to say the least.

Here are the women’s national teams ranked ahead of Nigeria in the latest FIFA ranking.

USA maintains top spot and so do Sweden(2) and France(3) as they occupy the top three while the Netherlands moved up to fourth and Germany drops to fifth.

There are no changes between six and sixteen with Canada, Spain, England, Brazil, Korea DPR, Norway, Australia, Japan, Italy, Denmark and China occupying those spots.

Iceland moved up to 17th, Korea Republic dropped to 18th while Belgium and Switzerland swapped places at 19th and 20th.