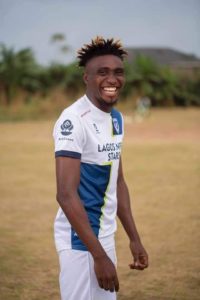 Defensive Midfielder Anthony Omaka will leave Enyimba to pitch his tent at Kwara United if reports making the rounds are anything to go by.

The player is reported to have signed a deal that will see him play for the Harmony Boys for two seasons.

The former Sunshine Stars player joined the Aba giants in 2020 for a reported fee of 3.5 million.

He at one point of the season moved from Enyimba to Katsina United on loan in a mid-season transfer deal in the 2021..

Remo Stars, Rangers International and Shooting Stars were other teams who had interest to sign the former MFM FC player.