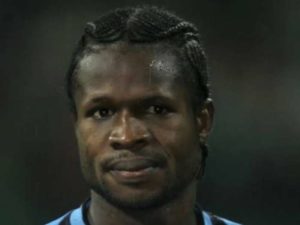 Abductors of ex-Super Eagles player, Christian Obodo, who took him in on Sunday evening in Delta State have released the 36-year-old.

The kidnapping, newsmen gathered, happened along Refinery Road in Effurun, Uvwie Council Area sometime around 5pm on Sunday, November 16. He was reportedly set free at night on the same day.

The player’s release was confirmed by his friend Engr. Big Sam on Monday morning.

“He has been released. He was released last night. I met him this morning. The town is becoming more unsafe. We are glad that he is back home,” Big Sam explained.

The former defensive midfielder had stopped along the Refinery Road to buy bananas when his assailants whisked him away to an unknown destination.

Speaking about the ordeal, the retired footballer was candid, “It was really discomforting locked up in a hot car trunk for hours.

“The kidnappers were even telling me about how they lost money for placing bets on Nigeria to score in the second half.

“They didn’t hurt me or intimidate me but I can’t understand the reason for anyone to want to put me through this sort of thing over again.”

Newsmen learnt that he paid an undisclosed sum as ransom to effect his release. Upon enquiry, the Delta Police Public Relations Officer, DSP Onome Onovwakpoyeya, confirmed his abduction Sunday evening but could not disclose whether he had been released.

Recall that this is reminiscent of Obodo’s kidnapping in 2012 when he was abducted on his way to church on the 9th of June. The day after that abduction, policemen were able to track his abductors to Isoko, just outside Warri. There, they found the player and arrested some suspects