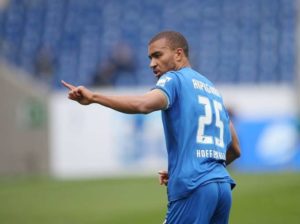 Hoffenheim defender Kevin Akpoguma has been ruled out of Nigeria’s 2022 FIFA World Cup qualifying fixtures against Liberia and Cape Verde after testing positive to Coronavirus.

Akpoguma is the second Super Eagles player to be ruled out of the game after Frank Onyeka was forced to withdraw from the squad on health grounds.

Abia Warriors defender Adekunle Adeleke has been called up as a replacement for Onyeka.

Kevin #Akpoguma has tested positive for coronavirus, despite being fully vaccinated. He will not join up with the @NGSuperEagles squad and will instead quarantine at home. Kevin is displaying no symptoms and is well,” his Bundesliga club Hoffenheim said in a statement on Monday.

“Furthermore, all present players and members of the coaching and support staff were tested. All test results came back negative .”

The 26-year-old has scored one goal and recorded one assist in three league appearances for Hoffenheim this season.

The former Fortuna Dusseldorf defender, who made his debut for Nigeria in a friendly 1–0 loss to Algeria in October 2020 has made four appearances for the country.