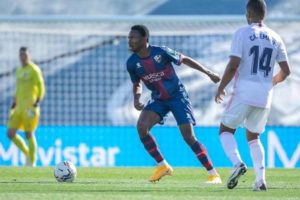 Nigeria midfielder Kelechi Nwakali has joined Spanish Segunda club CD Alcorcon on loan for the rest of the campaign.

Nwakali has struggled for regular playing time at LaLiga side Huesca this season after playing a key role in the club’s promotion last season.

The 22-year-old club has made five league appearances for Huesca this season.

“Kelechi Nwakali, a footballer for the Sociedad Deportiva Huesca, will play on loan at the Agrupación Deportiva Alcorcón until the end of the season. The Alto Aragonese club and the Madrid club have reached an agreement for the transfer of the young midfielder, international in the lower categories with Nigeria,” reads a statement on the Huesca website.

“Kelechi Nwakali (Nigeria. 06/05/1998) is a new potter player until the end of the season on loan from SD Huesca,” the club stated.

He will be officially presented by Alcorcon in the coming days.