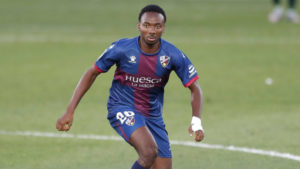 Former Golden Eaglets star Kelechi Nwakali was in action for 71 minutes as Huesca secured a comfortable 2-0 win at Real Sociedad B for their third win of the season in the Spanish second division.

Nwakali, making his sixth league appearance of the season, was brilliant in the middle of the park for the away side, with a 93% pass accuracy before he was substituted.

His defensive duty was also solid, with three clearances, one interception, and three duels won. Nwakali has endured a difficult time over the last few years, but he seems to be enjoying his game again.

The game itself was balanced despite Huesca 2-0 win. Real Sociedad B, who are managed by former Liverpool player Xabi Alonso, had the equal share of the possession and more shot on target.

However, they were not clinical enough in front of goal. Huesca, who created three big chances, secured the win courtesy of a brace from Isidro Pitta.

The Paraguayan opened the scoring in the 17th minute before firing his second in the 90th minute to send Huesca up to fifth in the standings.