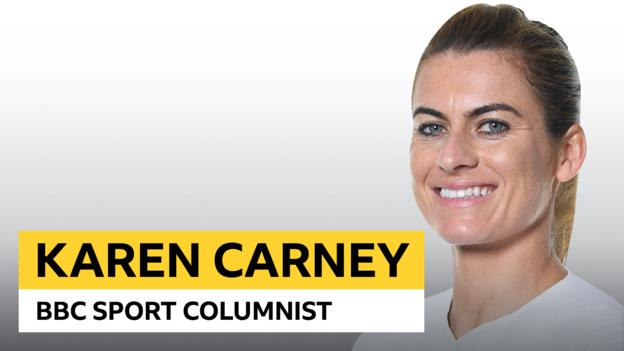 Former Chelsea and England midfielder Karen Carney, who retired after helping the Lionesses reach the World Cup semi-finals this summer, is writing columns for the BBC Sport website, working on Radio 5 Live and featuring on BBC TV this season.

In January, Leicester City defender Ben Chilwell was linked with other clubs - such as Chelsea and Manchester United - which as a player is a huge compliment.

However, the flip side of so much speculation can affect you.

I can't say what he is thinking or feeling. Nobody knows what goes on inside someone's head. But when I was involved in transfer speculation as a player it was in the back of my mind.

You can lose concentration and take your eye off the ball. You do not always realise it but it can creep in and your performances drop.

Leicester manager Brendan Rodgers has had to pull him up a couple of times this season because his form has dropped off a bit - he was not in the squad against Burnley and was only on the bench against West Ham United - but he is back in the team now and scored against Chelsea in the 2-2 draw earlier this month.

Overall, Chilwell has not done too badly this season and that's why other clubs are still interested.

Last season was good for him and he made his England debut in the friendly win over Switzerland at the King Power Stadium. It is massive when you become a senior international. It definitely adds pressure. We saw it with Tottenham midfielder Dele Alli as well.

When you first come on the scene, you are young, exciting and nobody knows much about you. Then you kick on and in the second season there is a label on you. You are an England player, a senior international and are expected to perform at the top level consistently. The opposition learn how to deal with you better and prey on your weaknesses.

There is all this expectation and pressure around you. The fun goes out of the window a little bit and you are not just rolling on momentum.

I found it the hardest part of my career. You are not young enough to be forgiven for mistakes but you are not old enough to have the experience. You are in the between age of trying to figure it out and it is flipping hard.

But Chilwell's versatility is really good for England so I do not think he needs to worry about his place at the Euros. January has gone now so he needs to get his head down and kick on a gear - Leicester have a tough match on Friday against ninth-placed Wolves (20:00 GMT kick-off).

Chilwell is forming a good partnership with Leicester team-mate Harvey Barnes this season. I was a winger like Barnes and I was heavily reliant on the full-back - you need them to feed you the ball.

That partnership only comes by playing together regularly. Barnes, who is still only 22, has had to bide his time. He only started one of the first five Premier League games of the season, but he has fought his way in and is now keeping Demarai Gray out of the team.

I think Barnes has been Leicester's best player since Christmas. I remember watching him in the 2-1 win over Tottenham Hotspur back in September. He impressed me and really caught my eye.

His impact was overshadowed by bigger names in the squad because he was not scoring. Now he has added end product to his good performances, contributing to 10 goals this season.

You can see his confidence has grown too. He has started 17 of Leicester's 25 Premier League games in 2019-20 and that shows Rodgers clearly has faith in him.

In the 2-1 victory over Tottenham in September, Barnes played 82 minutes, making two key passes (level with James Maddison and Youri Tielemans) and had three shots in total - only Maddison had more (four). Fourteen of his successful 18 passes were in the opposition half. The touchmap above shows he got on the ball eight times in the opposition box.

When you are a young player coming in off the bench like Barnes, your main concern is to just stay in the team. There was probably a bit of anxiety before.

I cannot reiterate how important playing week-in, week-out is for any player's development. You have to play. And you can never give the manager an excuse not to play you - you have to give him a headache. Barnes is doing that because he's playing well consistently, working hard and contributing to goals. How can Rodgers not play him?

He needs to continue to work on providing that goal threat because that's the difference between the best and the rest.

Barnes is working with a good manager so he should be able to do that. A lot of managers just focus on results. I get the impression Rodgers coaches individual players to make them better, as well as the team. That does not happen a lot in football.

Harvey Barnes' stats in the Premier League this season