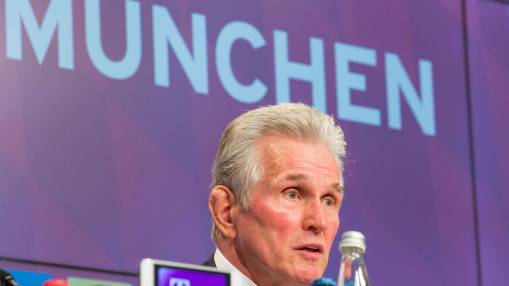 Thomas Muller has been singled out by returning Bayern Munich boss Jupp Heynckes as a leader within the club.

Jupp Heynckes has said he is looking forward to the first game of his fourth spell in charge of Bayern Munich.

Heynckes, taking charge of the Bundesliga champions until the end of the season following the departure of Carlo Ancelotti, faces Freiburg at the Allianz Arena on Saturday.

And he said he felt the mood around the club, five points adrift of leaders Borussia Dortmund, had improved in recent days.

He said: "It's been an intense week packed with a lot of work. I need to get back into the groove again, I know that.

"But a lot of people in the club, in the staff already know me. They all say that there is a very good atmosphere. The players are enjoying their work again."

Heynckes, who won the Treble with Bayern in 2013, singled out the experienced Arjen Robben, Franck Ribery and Thomas Muller as players he felt could help get the team back on track.

"Juventus have reached two Champions League finals in recent years with an average age of around 30," he said. "Age is not relevant.

"Football is played with the legs, but on the other hand the head is far more important for a few.

"I've rarely seen someone as emotional as Robben was in his last Netherlands match. It shows that his enthusiasm is still burning.

"This also applies to Ribery. He's already back in the weight room, and I am convinced he will do well under me.

"I had a longer chat with Muller, and I've seen him in training this week. He's just like in the old days in front of goal."

He said: "We need to be successful, and it's not done only by creating a good atmosphere.

"The secret to success in football is not to be great in attack but have a stable defence. The whole team needs to work in defence, to keep the pitch small. I expect a highly-motivated team.

"Some players need to take more responsibility, first of all with performances, but also how they interact with the team."

He said central defender Mats Hummels "has all that it takes" but urged defensive partner Jerome Boateng "to show himself more" and said David Alaba needed to "raise his profile again."

Heynckes added that he was looking forward to his return to the Allianz Arena and added: "Pride might be too strong a word, but I will be delighted with the welcome.

"It's a confirmation of the work I did here, but people tie expectations to it and we need to meet them. I am confident."