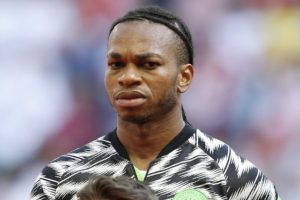 Nigeria's midfielder Joel Obi lines up for the anthems ahead of the International friendly football match between England and Nigeria at Wembley stadium in London on June 2, 2018. (Photo by Ian KINGTON / AFP) (Photo credit should read IAN KINGTON/AFP/Getty Images)

Serie A New comers Salernitana have completed the signing of Super Eagles star Joel Obi on a one-year deal with an option to renew at the end of next season.

As per Football Italia, Soccernet reported that the newly-promoted side is interested in signing two Super Eagles stars, one of which is Obi.

The deal is now official, with Salernitana confirming the signing of the Nigerian star on their website.

A statement on the club’s official website read: The US Salernitana 1919 announces that it has reached an agreement with the ’91 class midfielder Joel Obi. The player has signed an annual contract with the grenade club with automatic renewal upon the occurrence of certain sporting conditions.

Obi joins the side after his contract with Chievo Verona expired in June. The Garnets are getting a player with enough Serie A experienc

The 30-year-old has played for clubs like Inter Milan, Torino and Parma in the Italian top-flight. He’s also a full Nigeria international with 17 caps to his name, although his last appearance for the Super Eagles came in 2018.

Obi could be joined by Simy Nwankwo at his new club. The Crotone striker is set for talks with Salernitana officials this week over a potential transfer.